The Reagan-Udall Foundation for the Food and Drug Administration is pleased to announce the call for nominations for the 2018 Innovations in Regulatory Science Awards. The Foundation will be honoring the leadership and achievements of those whose work represents the progress and promise of regulatory science and advocacy. 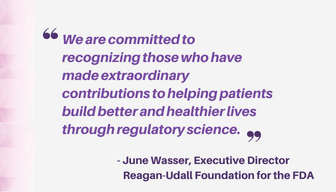 This year’s Awards Dinner will be held on December 4, 2018 from 6:00 pm-9:00 pm, at the Kaiser Permanente Center for Total Health in Washington DC.

The Awards’ proceedings will include a opening reception and a seated dinner. Brief remarks will be provided by the FDA Commissioner, Dr. Scott Gottlieb.

Nominations for these awards will be submitted in two categories. The Leadership Award recognizes an individual’s significant lifetime contributions and service to regulatory science and public health; and the Innovation Award is for an individual or organization in recognition of their particularly distinguishing contributions to regulatory science or policy to improve public health. Our 2017 honorees were Janet Woodcock, MD, Director of the FDA Center for Drug Evaluation and Research and Patrick Ryan, PhD, Senior Director and Head of Epidemiology Analytics at Janssen Research and Development.

For instructions on the 2018 Awards nomination process, see below. Completed nomination forms must be returned via email to Elisabeth Shaefer (eshaefer@reaganudall.org) by August 15, 2018.

Anyone can submit a nomination. However, Foundation Board members and staff are not eligible to be nominated. Self-nomination is allowed.

What award can a person be nominated for?

Nominations are requested for:

All submissions will be reviewed by our distinguished Awards Committee that includes: